When ethics went for a toss

A baby was born to a pair of parents after the mother went through a series of miscarriages. The parents were happy and grateful to the doctor who helped in the process. A private hospital in Guwahati was also involved in the whole exercise.
At a personal level, apparently it is a happy news; may even be exceptional. I hope nobody would doubt that. Having a baby, by all counts, is a personal experience to be shared with friends and relatives. It, however, hardly qualifies as news unless you are a Princess or a celebrity. Nobody would perhaps be interested in Nomal kai becoming a father. Would you like to read it on first person from Nomal in a newspaper that one has to buy paying money?
The first cardinal rule for a something to be news is that it has to be new. Newspapers are deluded with news everyday and all newspapers has a policy (either declared or undeclared) of selecting news. One of the widely accepted thumb rule is that the news has to have relevance to the public. The unwritten ethics in newspapers tell all editor to be on guard against advertisements passing as news. When it happens, we call them paid news.

Now, read this piece in The Assam Tribune under the headline "A New Lease of Life". (I am also placing a downloadable image of the piece at the bottom, in case the internet link becomes inaccessible). The parent was all ga ga abut the private hospital and the doctor involved. He wanted to share it with readers of the newspaper and the newspaper gave him space to do so. Apparently nothing wrong in that; except the fact that para 6.1.1 of the Guidelines of the Medical Council of India says - "A physician shall not make use of him / her (or his / her name) as subject of any form or manner of advertising or publicity through any mode either alone or in conjunction with others...". It also says that the doctor shall not permit the publication of any report to boast of cases, operations, cure or remedies through any mode. If anybody cares to complain, the good doctor may lose her license for being a part of the publicity.
The other issue here is finding "point of public interest" in the piece. The page on which the item appeared also carries 'Obituary'. One can understand the logic of carrying Obituary as a homage to the departed. But, what was so extraordinary in the birth that warranted it to be a news and not an advertisement can best be deciphered by my esteemed readers. Or was it so that an advertisement has actually been passed as a news? If it actually happened in a newspaper like The Assam Tribune, its time to become concerned. 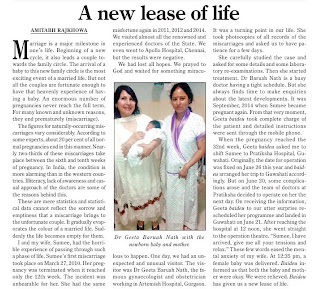