My People - My Concern : One

This news appeared on Friday, 9 June in Kolkata edition of Business Standard. I have waited till today to see if any of the 16 Guwahati-based newspapers that I have access to on a regular basis picks up the news. They did not. 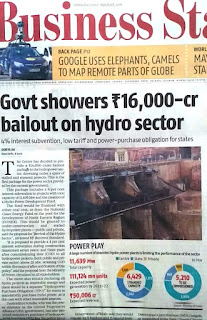 The Context:
Any news on Hydroelectricity is of concern to me as I have been reading for last 20 years that Assam, Arunachal Pradesh and other northeastern states together has potential for production of more than 60,000 MW of electricity through hydel projects - either run of the river or on dams. Realisation of this potential can make India power surplus nation, experts kept on telling.

The irony of it lies in the fact that, almost none of 133 projects in Arunachal Pradesh, out of which 125 were allotted to private companies during the UPA rule, have so far been commissioned because of various issues. The annual report for 2011-12 of the Ministry of Power had proposed that 57,672 MW of power be generated in the Northeast, of which 46,977 MW are to be generated in Arunachal Pradesh alone. It is also very interesting to note that whoever gets political power, becomes aware of the benefit of hydroelectric power. The big thrust to hydroelectric projects was given by Congress during 2000-2010. BJP had then consistently opposed it. When BJP came to power in centre in 2014 they started to realise importance of hydel projects.

Similarly in Assam, a major project - the 2000 MW lower Subansiri Hydroelectric Project at Gerukamukh - being executed by NHPC is stalled since December 2011 because of protest by various political parties and groups. The project has been a staple for media and political parties for almost six years now. In October 2013, Congress Chief Minister in the State Tarun Gogoi appealed to protesters to stop stalling the work of the project.

During the 2014 Parliamentary election, BJP and AGP (Asom Gana Parisad) along with All Assam Students Union and Krishak Mukti Sangram Samiti (KMSS) had opposed the construction of the dam for the project. However, when these two parties came to power in the State, their opposition has weaned and the Union Power Minister Shri Piyush Goel has recently (April 2017) thanked Assam Chief Minister for lending support for the project. ASSU has become silent on the issue and KMSS has become weak with its leader Akhil Gogoi being arrested and put in jail for close to six months soon after BJP came to power in Assam in May 2016.

The lone resistance to the project now remains in the form of a case in NGT. Abhijit Sharma of Assam Public Works petitioned the National Green Tribunal against the dam and the hearing on the case ended on 27 May 2017. Initial project cost was Rs. 6285 crore, but an estimate in August 2016 by NHPC CMD K.M. Singh pegged the cost estimate at Rs. 17,000 crore. The project was to start generating from 2014.

The News in Business Standard:
A large number of hydro-power plants are stranded in the country. The total power that can be generated by the hydro-power plants that are being constructed in the country is 11,639 MW. The projects that are stalled has a capacity to produce 6,429 MW. Out of this, 1411 MW is in private sector, 2171 MW in Central sector and 2847 MW is in state sector.
Stalling of the projects results in cost overrun and increase in price of per unit power when the projects become operational. The current tariff of hydropower is about Rs. 3 - 3.15 per unit. The rate for stalled projects would be Rs. 6 - 7 per unit.
The installed capacity of hydropower projects in India is about 40,000 MW at present and the sector has recorded 28% growth in last 10 years. Whereas, renewable energy sector (Wind & Solar) has recorded a growth of 89% in the same period, 20% of the growth coming in last 3 years.

So, the Ministry of Power has proposed "Revival of Hydro Sector" with a central fund of Rs. 16,000 crore called the Hydro power Development Fund. Under the proposal, a 4% interest subvention for 10 years (7 years during construction, 3 year after commissioning) would be provided to all projects above 25 MW capacity including private ones.  Currently, a hydro project with installed capacity of less than 25 MW is considered under renewable energy and falls under administrative purview of Ministry of New & Renewable Energy. Projects with more than 25 MW installed capacity fall under Ministry of Power and the largest hydro-power company NHPC.

The proposal also entails declaring all hydro projects as renewable energy. And as is applicable for all renewable energy, the states will have to mandatorily purchase hydel power under "Hydropower Purchase Obligation" (HPO).

The fund for this bail out will come from either Coal Cess, or from the National Clean Energy Fund or the non-lapsable pool for the Development of North Eastern Region (DONER). Both private and state projects would receive funds.

Between the lines and the concern:
(1) The government has committed in Paris Climate Change Summit-2016 to build 40% of its total energy generation from renewable sources. Reclassifying all hydropower projects as renewable energy and kickstarting the stalled projects, the government wants to meet its Intended Nationally Determined Contribution (INDC). That's also why we have suddenly woke up to solar energy even if the companies supplying solar panels are Chinese.

(2) The interest subvention is proposed for not only the ongoing and stalled projects. The proposal says it will be applicable to any project that would be commissioned within five years from the date of notification of the policy. That means, any new project which is completed within five years will get the benefit for the period of construction and three years after commissioning. This is intended at benefitting private players at the expense of government money.

(3) Why the Rs. 16,000 crore from non-lapsable fund of DONER? After all one of the major projects (Lower Subansiri) has been opposed because of concern related to possible disaster from the dam, adverse effect to ecology and doubt over the benefit of the project. Now, you are trying to compensate the project with our money?

(4) Why this arm-twisting of the states with HPO? The states will have to buy power at higher rates from these projects even if cheaper power is available. When UPA Power Minister Jyotiraditya Scindia had proposed HPO, the BJP-ruled states made a huge noise.

(5) If the government is planning to fund the bail out with taxpayers' money, aren't they also stakeholder in the proposal. Why is not made public yet?

(6) Why media in Assam is quite? Is it ignorance? Or is it something more sinister than that? After all the media in Assam have so far been the greatest supporter of Akhil Gogoi when he came to prominence with his opposition against big dam. The Congress has always supported big dam, but BJP opposed it before election. Now they have become even bigger supporter of big dams. So, the Parivartan was actually acceleration of the Congress policy.

You can read a nice piece on Dams by Ramchandra Guha here.